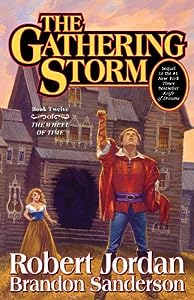 Summary: Recommended only to the very determined WOT fan. If you haven’t read any of them, read Eye of the World, since it is very good.

After reading the rather enjoyable The Way of Kings I figured I’d finally return to the latest in the world’s longest running Fantasy series, The Wheel of Time, also known to us long time fans as The Wheel of Tedium. Sure the first five or so volumes were amazing, but now at twelve, plus a prequel, and with each clocking in at around 400,000 words it’s getting a bit… long. First of all, since it had been five years since I read volume eleven (which was decent, and cost me a good chunk of life by motivating me to install World of Warcraft) I had to do a little studying. Even with a partially photographic memory I found that while reading the summaries of books 9-10 online to “bone up” that I couldn’t remember even remember reading 10. Well, maybe a little. Anyway, the cast of characters has grown so vast that no one could be expected to follow it without extensive study if any appreciable time has passed between reading (and eleven was released five years ago). But I began. I forced myself through about 200 pages (no movement in the plot) and found I could only care about the tower thread. This major plot thread, the most important one of this volume, involves Egwene in the White Tower.  I’ve always liked the White Tower, as long as I turn off my sexism detector because the way in which Jordan has always written women — bitchy and he goes to great length to show and tell this point — grows very tedious. For pages 200-500 I read the Egwene chapters (enjoying them immensely, and skimmed most of the other chapters. Eventually, even this became too much and I had to resort to the WOT wiki to read chapter summaries for all the chapters except for Egwene’s and Rand’s, and even Rand’s were pretty painful. To tell the truth, ever since Rand became the Dragon Reborn and big head honcho he hasn’t been that interesting. Being a ridiculously-all-powerful-dude-in-command-of-vast-resources-and-armies leads to scenes that smack of the new Star Wars council or those with Orpheus in the Matrix 2 or 3. If you loved those… read on. Anyway, the Egwene section is a novel in itself, surely over 100,000 words, and is quite good, wrapping up with a big battle at the end. Because I’m a completist, I’ll force myself to skim through volumes thirteen and fourteen to finish the epic, but I doubt I’ll enjoy it. With all my skimming I was able to “read” the whole thing in one day. It was certainly no worse than any of the recent volumes and I was unable to tell where Jordan left off and Sanderson began, it felt authentically Wheel of Tedious.