Book Review: The Way of Kings 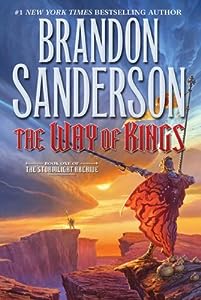 After finishing the 6th major draft of my own book I decided to tackle this 400,000 word hunk of “light” reading. Sanderson is the relatively young fantasy author who is finishing the late Robert Jordan‘s Wheel of Time series, and this is the first volume of a new massive epic fantasy of his own. Surprisingly, despite its tome-like weight, it was a fast read. Maybe three days, and gripping enough all the way through. Sure, I would have chopped about 30,000 words worth of interlude chapters involving completely irrelevant characters, and the beginning has the requisite boring high fantasy prelude, but the bulk of the book hauls right along. Probably about 2/3 of it is centered on the life of a slave in a vast military camp. This has a detailed personal feel that is highly engaging. Although there is a reasonably satisfying sub-conclusion, this is clearly a setup for a very long story and highly introductory. There is an interesting magic system and overall world mythos. The magic does borrow really obviously from his own Mistborn series — where I had found it extremely novel — but it’s still good. Overall, the book works, at least for the avid fantasy reader.

My review of the sequel, Words of Radiance, is here.