Summary: Excellent, but not without issues to discuss

I must state right off the bat that I’ve been a huge Dune fan for decades. I’ve read the first book 4-5 times and the entire series at least once (although it’s been decades) and am also one of those rare fans of the 1984 David Lynch version. I’ve always liked David Lynch films in general and even in 1984 when my brother and I saw the film in the theaters we both loved it — confusing as it was. Yes, that version is highly flawed, and in its theatrical version almost impossible for novices to follow, but the art design is phenomenal and some of the lines incredibly quotable like “the sleeper must awaken!”

If you are at all interested in viewing or revisiting this slightly dated, but still highly memorable classic, the ultimate version is this one:

There have been a lot of Dune 1984 versions, all with issues and this is by far the best. It’s hard to understate how much clearer it is with starts and conclusions to various threads that other versions leave dangling. This remarkable fan edit draws on a huge array of deleted scenes and reworks the entire flow into a comprehensible and detailed narrative. It’s the closest thing we will probably ever get to Lynch’s planned longer vision (the producers just cut his 4 hours of footage down to 2 hours themselves to satisfy the studio).

Anyway, we are here to discuss the 2021 Denis Villeneuve Dune, which was not only released 37 years later, but runs longer than the 1984 theatrical version and only covers the first half of the novel — so theoretically it uses about 250% more minutes per page. Reading many reviews beforehand, and much excited, I expected the new movie to cover enough of Frank Herbert’s immense world building, vast cast, and complicated political plot to allow “novices” — defined as those who have not read the novels — to follow along.

Alas, I’m not sure it did. Having introduced countless friends to the joys of the 1984 version — which I gleefully owned on Laserdisc as far back as 1990 — I learned that about 10 minutes of pre-screening briefing and a number of mid-pause asides during the film drastically increased people’s enjoyment. So having decided to watch the new film with my 12.9 year-old SciFi/Fantasy/VideoGame loving son, I gave him a bit of background. And boy am I glad I did. He needed a lot of mid film explanations and ended up enjoying it a lot, but he declared that without them it would have been a jumble of meaningless action. 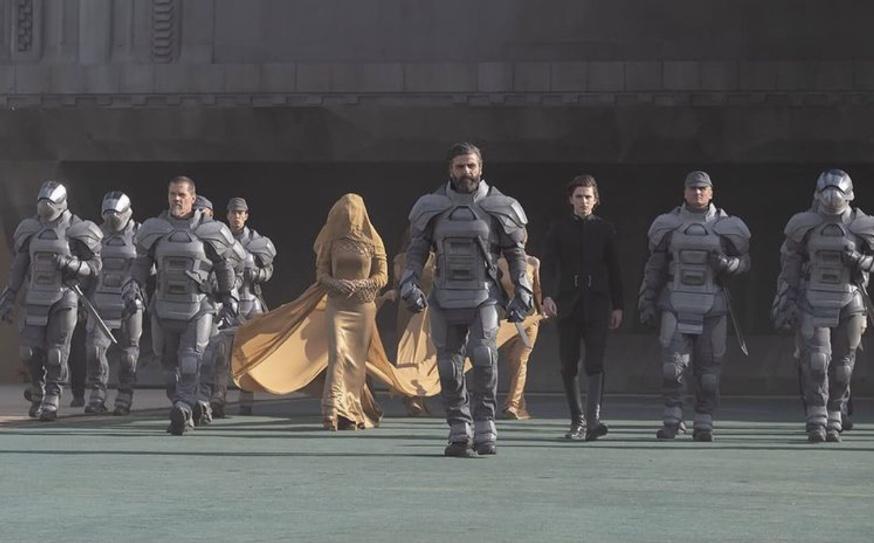 That’s not to say that the 2021 Dune isn’t a great film. I enjoyed it immensely and its art direction, cinematography, casting, acting, and very importantly sound design are totally epic. And it’s very faithful to the (first half of the) novel — more than the 1984 version — but it also offers far more subtext and far less outright exposition with regard to both the plot and the world building. Bear in mind that this world is very complex with dozens of important factions and characters.

Paul and his mother Lady Jessica get more development than in 1984 as does Duncan Idaho and Liet Kynes but others, notably both mentats (Thufir and Piter) and Dr. Yueh are, if not less developed, at least “less explained.” There is relatively little effort made in the new Dune to actually explain most of the complex factions of Dune‘s universe. I’m not even sure that the word “mentat” is used in the film nor is “imperial conditioning.” There are nods to them. Yueh has the imperial symbol on his forehead. The mentats have a funny lip tattoo and roll their eyes back when “computing” but I think Villeneuve and his team decided that going into a lot of exposition about these evolved humans and societies would distract from the narrative — or at the very least make it impossible for them to tell the story of the first novel in their planned five hours — and they may be right. Really, I think Dune (the first novel) deserves about 10-12 hours and would be best suited to a Game of Thrones style TV series — ideally with the same production values as this film. Alas, wishful thinking. But reworking this plot and world building enough to allow showing rather than telling would be very challenging. George R. Martin wrote his novels, particularly the first three, in a more cinematic style that leant itself better to this as it has constant twists and turns while doing said world building. Dune relies more heavily on just exposition in a way that works well in a novel and less so in a 21st century film. 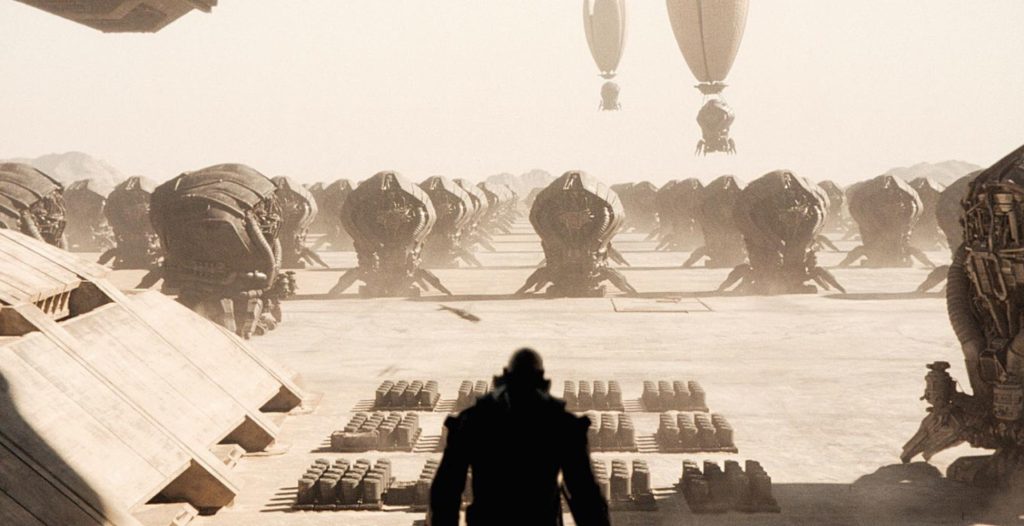 However, what we do have on screen is spectacular. The casting is uniformly awesome. The two mentats and Yueh have a bit less personality than in 1984, but other than that I’d say everyone is really really well cast — so much so that for someone like me, very familiar with the characters — they just inhabit the rolls naturally. Certainly Timothée Chalamet is more appropriate than Kyle MacLachlan as Paul, even if I love Kyle MacLachlan’s work (particularly in other David Lynch masterpieces like Twin Peaks). Timothée is both younger and far less wooden. He seems to be learning and changing as the film progresses. Stellan Skarsgård might not be as colorful or pervy as the 1984 Baron Vladimir Harkonnen, but he is far more menacing, creepy, and intelligent. The acting is of course far more modern and free of that 1980s over-the-top style and equally free of the oddball voiceover thoughts that the older film uses to give insights into the characters and plot. But while this makes it far less cheesy, those voiceovers did serve important functions in the older film and I couldn’t help but hear them in my head while watching the new scenes — which again begs the question as to how well the uninitiated will understand the what and why. That being said, there is more effort put into explaining those aspects of the plot which are most important, particularly many political elements, but it’s a bit streamlined. For example, a scene where the Bene Gesserit visit the baron and insist that he not kill Jessica and Paul explains why he chooses to send them into the dessert rather than just straightforwardly kill them. 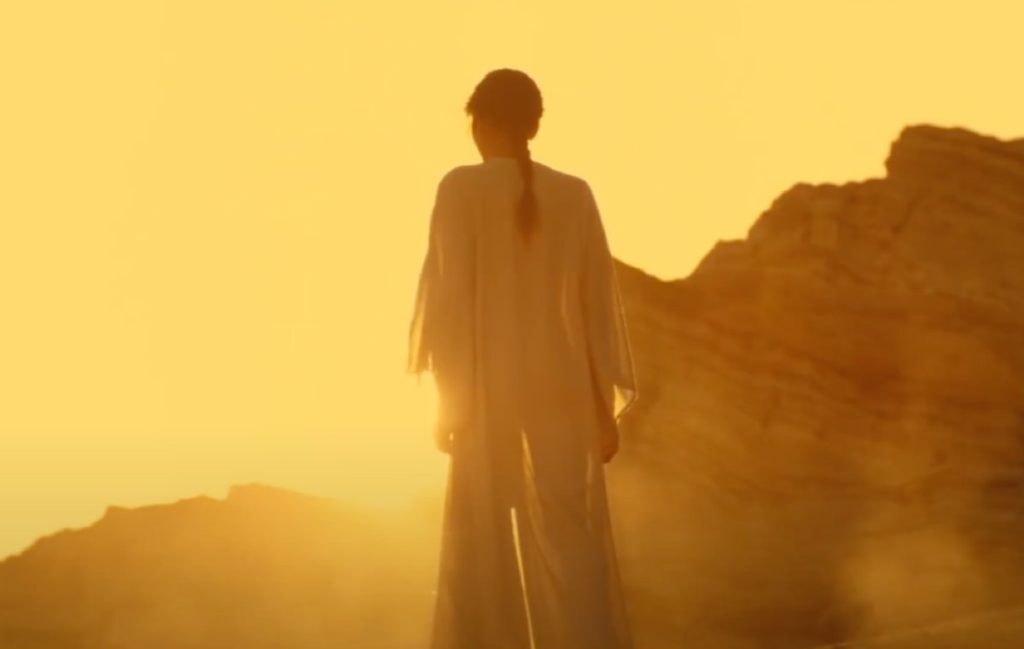 Paul’s visions — essential in both the novel and previous versions — are retained and reworked here. For me, knowing what I know, they did an excellent job suggesting his unmooring from the present and “expansion” into the possibilities of the future. Herbert’s novel is a product of the 1960s and full of not-so-subtle drug and religious metaphors. There was enough vision material in the film that I could find the strands to imagine the beginnings of Paul’s ascension into the Kwisatz Haderach but it requires some foreknowledge and imagination.

And it must be restated how gorgeous (and great sounding) this film is. It offers big shots free of obvious CGI (even if they are) fabulous costumes and an extremely artful and very Villeneuve directorial style. Every shot is composed with regard to the spaces and geometry to present striking imagery. And Hans Zimmer’s very Hans Zimmer score is moody and powerful, if less Toto than the also excellent Lynch version score. The 2021 Dune is shot and edited in this artful cinematic style and what is decidedly measured and by modern standards.  Villeneuve shows unusual willingness to eschew rapid cuts leading to an entirely cinematic work. It does not feel like television at all. It’s clearly a film in the grand tradition of such and therefore has that emotional visual impact that is one of the great hallmarks of the film medium.

So I eagerly begin what is hopefully only a 2-3 year wait for part 2! 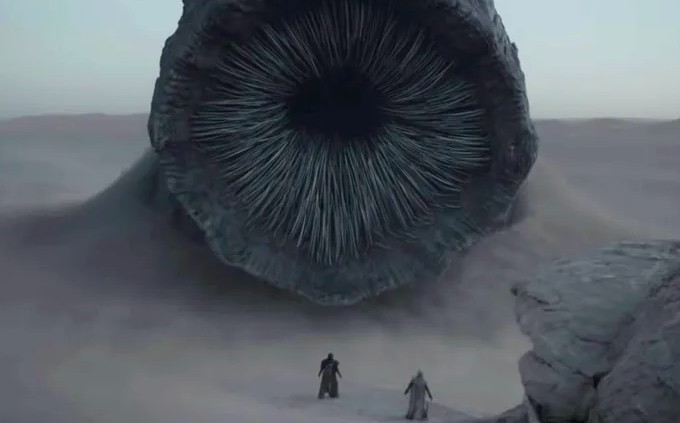